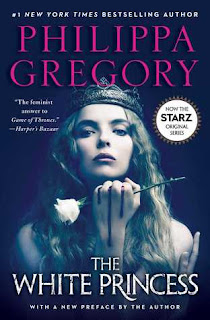 When Henry Tudor picks up the crown of England from the mud of Bosworth field, he knows he must marry the princess of the enemy house Elizabeth of York to unify a country divided by war for nearly two decades.
But his bride is still in love with his slain enemy, Richard III and her mother and half of England dream of a missing heir, sent into the unknown by the White Queen. While the new monarchy can win power, it cannot win hearts in an England that plots for the triumphant return of the House of York.
Henry s greatest fear is that somewhere a prince is waiting to invade and reclaim the throne. When a young man who would be king leads his army and invades England, Elizabeth has to choose between the new husband she is coming to love and the boy who claims to be her beloved lost brother: the rose of York come home at last.

A really good historical fiction novel that you really come to love these characters who were actual people. I think one of the things is that you have two individuals Elizabeth of York, Princess Elizabeth and Henry Tudor, who become Henry VII, King of England who at first don’t seem happy about the situation. Because of the War of the Roses, they have to unite their houses.

In order to understand the way our characters is to realize that these two individuals have witnessed their families and England going through hell because of which family would rule, Lancaster now Tudor and York. So marriage is a way to unite the houses and put an end to war and conflict or so we think. It is not easy for Princess Elizabeth to deal with the fact that her mother, Lady Margaret Beaufort, is her new mother in law and has her own ideas and is a bit of a religious zealot. She is also one of her sons most trusted advisors. This makes things difficult.

Princess Elizabeth also has to deal with her husband’s insecurities and paranoia through out the book. Not to mention we are dealing with uprisings all through out their reign. Not to mention there are a few pretenders who come claiming to be one of the two princes in the Tower who supposedly were killed, but according to history their bodies were never found. Now this leads to some wild theories of what might or could have happened. There are people who claim to be Prince Edward and join to their side. Later on, there is Perkin Yarbeck who claims to be Prince Richard. So this becomes an issue of are these young men really just pretenders. Some people in history have claimed that Elizabeth Woodville, the White Queen and Elizabeth’s mother really might have sent another boy to the tower instead of the real Richard, and hid him away. This theory is one that haunts people.

Yet, as the relationship grows between King Henry VII and Queen Elizabeth-Lizzie, they learn that they have to fight for their family and that nothing and no one will threaten his reign or his heirs from inheriting the kingdom and what he believes to be truth. They deal with quite a lot. They also tend to have children and we get to see how Elizabeth and Henry handle being parents and royal parents at that. They have to raise their children and educated them on how to act.

This book had some really interesting moments between the couple. I also like how both of them have different attitudes and conflicts. He always believes he is right. Sometimes he doesn’t trust anybody, including her, his own wife because of her being a York. She tells him that she knows nothing and this angers him a lot. I like how he dismisses the fact that her mother placed a cursed on whoever killed her brothers. These things don’t bother him at all. Of course nothing ever goes right for him. He has to always fight for what he believes in and she stands by his side even when it pains her to do so.
I thought that this was an interesting look at how two individuals from two different rival families have to cope with the challenges of uniting and becoming a family. Plus rule England together despite not ever truly trusting each other and dealing with death of their loved ones, plots and turns, paranoia and so much more.

An interesting book and look at two interesting historical figures. This makes me very excited for the Starz TV Series which is premiering soon.

Grace Fonseca
I'm an avid reader. Love reading Books. Been reading since as early as I can remember